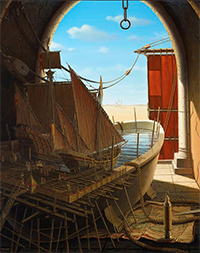 Was born in 1963 in Bietigheim-Bissingen  South Germany.

From his early youth, he was fascinated by ships, the sea and painting.

He built, owned and sailed boats thru all his years and made a living by various jobs, including beeing a public servant  at the German Post, an apprenticed gilder or a glassfibre worker at the Abeking&Rassmussen shipyard.

Between 1991 and 1997, he built his own gaff-schooner, which later became his part time home and atelier.

In 2003, he started business as a freelance artist and, still beeing strongly impressed by the sea, focussed on maritime subjects.

He participated in art exhibitions in Germany, the Netherlands or Switzerland and  was honored with several art awards.

As a very young boy, I sure remember, there started  a big dream: to travel the worlds oceans with my own sailing boat.

Twenty years later, the dream was reality, I found myself  sailing along the Pacific-coast of Australia.

But what do I have to say, with every mile, the boat made it´s way through the sea, I discovered more shades of colours around me.

The palette of the ocean seemed to be of endless depth.

Shiny sheets of glass, tinted in bright green, or painted in deep blue, suddenly changed to a fluorescent yellow, or dark brown, when hit by the suns beams, or turned to a deep black in the shade of a cloud.

There was no escape, I had to take out my paints and brushes and bann those colours on canvas.

Step by step, I learnt, that painting my impressions led to a voyage in itself.

Sometimes, I even thought, my imaginary endeavours were spiced with even more adventure than the real ones.

There´s the canvas and there is the sea!

I try to move on, and catch a glance into the world bejond their horizons, and this is what my art is all about. 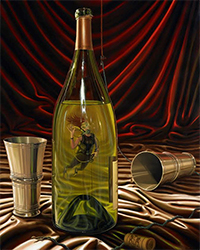 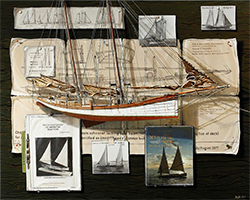